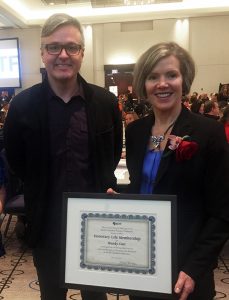 The Teacher Education Office extends congratulations to Associate Dean Dr. Wendy Carr on receiving a BCTF Honorary Life Membership for active and retired members who have given outstanding service to education at a provincial level; in recognition of distinguished service and contributions to the goals and objectives of the BC Teachers’ Federation.

On Monday, March 19, 2018, Dr. Carr attended a ceremony where she was presented the award by BCTF President Glen Hansman. Mr. Hansman had the following words to say:

It is my sincere pleasure to present Dr. Wendy Carr with the BCTF Honorary Lifetime Award. She began her career in 1976 in the Coquitlam School District and has taught French, Gifted Education, Technology Education and Physical Education among other subjects.

Wendy’s expertise and dedication led her to many notable leadership roles, that of department head, district helping teacher for Intensive French in the Surrey and Vancouver school districts, coordinator of French programs at the University of British Columbia and then Director in the Faculty of Education. Today, Wendy is Associate Dean of Teacher Education and Professor of Teaching at UBC.

In her current role at UBC, she has been an active partner with the BCTF, not only on the New Teacher Mentoring Project (a collaboration between the BCTF, UBC and BC School Superintendents Association) but also leading the Teacher Education for All initiative (a SOGI-specific project to bring more LBGTQ-inclusive education practices into teacher education), and more recently, work on child and youth mental health literacy education with Dr. Stan Kutcher.

Prior to her time at UBC, Wendy served as President of the BC Association of Teachers of Modern Languages PSA, was a longtime member of PSA Council and a BCTF-appointed member of several BC Ministry of Education French Curriculum Writing committees. Since 2007, she has also led the Canadian Association of Second Teachers, served as Canadian expert representative for language associations at the European Centre of Modern Languages and is now vice-president of Canadian Parents for French.

A colleague refers to Wendy as “an accomplished researcher and educator with an international reputation with multiple publications to her name and a number of awards. Always collaborative, creative, inquisitive and wise, she continues to work tirelessly to build understandings between programs and people, to make improvements, and advocate for the needs of those invested in French language education.”

On behalf of the BCTF, I am very happy to be recognizing Wendy’s most valuable contributions to students, teachers, teacher candidates and public education in BC.