While completing my BEd at UBC in 2003/04, I began writing my first children’s novel Trading Goals. At the time, I considered it more of an experiment or a practice-run before the real thing, but eventually began to wonder whether I might actually be able to get this one published. 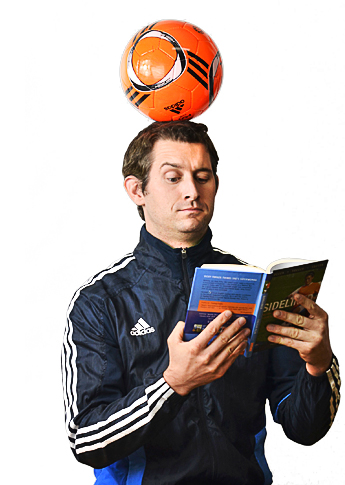 Having never traveled outside Canada and the United States, I was keen to get out and see the world after graduation, and if I am honest, this was the main reason, initially, that I chose to become a teacher. Foreign teachers were in high demand in the UK at that time and I received an offer to teach English at Cedars Upper School in Leighton Buzzard, Bedfordshire (yes, that’s a real place). I will never forget how utterly alone I felt as I stepped off the train onto the middle platform of Leighton Buzzard’s tiny station with nothing but a backpack full of clothes and a bicycle in a cardboard box. Google Maps being a few years away, I had assumed Leighton Buzzard was a suburb of London. Not so much. There were fields, cows, chip-shops and the tallest building in town was still the church.

My first day as a teacher in England was not a complete disaster, but it did throw me a few curveballs. The kids were actually quite excited to have a teacher from overseas, until they realised that I was actually going to make them do more than ask me questions about bears in Canada. As I asked the class to pull out the first novel we would be reading, one girl in the middle of the room stood up, shouted “I don’t loik reading!” and stormed out of the room. It could only go uphill from there, and it did, and I had three amazing years of soccer, Euro travels, and GCSE/A-level teaching that I will never forget, along with some of the wittiest and most supportive colleagues that a new teacher could ask for. I also managed to acquire an agent for my novel, but after several rejections from publishers, I pretty much assumed that it was not going to happen.

In 2008, looking for a new challenge and the opportunity to satisfy my long-neglected goal of mastering another language, I moved to Japan to teach IB-DP English Literature at Yokohama International School. Shortly before the big move, I learned that Lorimer & Co, a children’s publisher in Toronto, was going to publish Trading Goals, but that a huge amount of editing and rewriting would be necessary. That first year in Japan was pretty busy: a new school, a new curriculum, a new language, and a book to edit! I am still not quite sure how it all fell into place, but it did.

Having planned to stay two or three years, I am still in Japan, with no plans to leave any time soon. During my time here, I have had four more children’s books published with Lorimer, with another on the way in 2017, and I am hoping to branch out into different types of fiction in the future.

My experiences as a teacher have shown that this job can take you to unexpected places (Yokohama, Leighton Buzzard…), maybe even for your entire career. I have also found that teaching, which I initially chose as a way to enable my other interests of writing, travel and soccer, has actually become something that I really enjoy, a challenging but fulfilling career. Still, I would encourage new teachers to try to keep their other interests alive, as it can be tempting to let them slip away. Outside interests help to maintain a sense of perspective, which ultimately makes us better teachers.